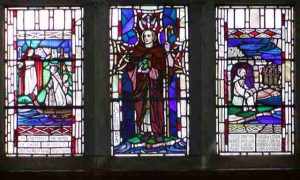 Memorial Window for those who fell in the Second World War: 1939-45

This memorial is in the central window on the east aisle of the Church.

It consists of three lights, depicting, in the centre, St Columba, standing on a green and rocky island suggestive of Iona.

The other lights represent scenes from his life - that on the left showing Columba’s banishment from Ireland, while that on the right his old age on the island where he founded his monastry.

Incorporated in the window are the names of the fallen, eight in number.