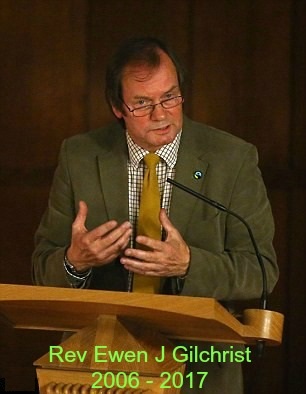 He was born in Helensburgh and brought up in Milngavie. Before joining the ministry he worked as a reporter and was a sub-editor of the 'Scotsman'. Following this Ewen studied divinity at the University of Edinburgh between 1976-81 and graduated with a BD, Dip Min.

His first position was as assistant minister at the linked charge of Eddleston and Peebles Old Church. He was ordained and inducted to Garelochhead in 1982 until 1988 when he was appointed minister of St Matthew's Church, Perth where he served for 17 years. In 1995 he gained a Diploma in Theology and Communication.

In March 2006 about 400 people filled Cults Parish Church when Ewen was inducted.

During his ministry, the former East Church building at 404 North Deeside Road was demolished and a new Cults Kirk Centre built, incorporating some of the features of the old church.  This has become a vibrant part of the local community where the Hub Cafe is open 3 days each week and also hosts regular coffee mornings and other functions.  The Centre is used by a wide variety of groups including Music to Remember, the Bereavement Support Group, Questions and Croissants, Messy Church and Friday Cafe.   These and the Alpha course and Core Group meetings are among many of the groups which have been established and prospered over the last 11 years.

The refurbishment of the sanctuary at Quarry Road was completed in the summer of 2007, removing the pews to provide a flexible layout enabling activities such as quiet, reflective Evening Services and Music in the Sanctuary to take place.  The Christmas Tree Festival has also proved to be an annual attraction for the community.

Cults Parish Church enjoyed 11 years of Ewen's ministry until his retirement in June 2017.  A Family Fun Day was enjoyed by the congregation, community, family and friends after his final service on 25th June of that year.

He very much hopes that the church and parish will continue to serve the community in their energetic and faithful manner for many years to come.